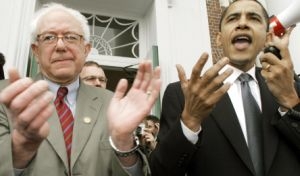 Senator Bernie Sanders is using his role as an independent to gather support for Democrat Barack Obama. Sanders joins us from the Democratic convention in Denver to look at the role of independent voters and Sanders’ own interest in working closely with Democrats.

And, Dartmouth College’s plan to build a $52 million visual art center at the southern end of campus has ruffled feathers with some in the community who think it will look "hideous." Valley News reporter John Gregg joins us to explain the complex relationship between the college and the town of Hanover.

And the classic sounds of typewriters are music to the ears of one typewriter repairman in White River Junction. We step into the shop where mechanical clacking keys are still appreciated.