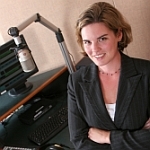 One week from now, Vermonters will go to the polls and choose which
party and which candidate to vote for the presidential primary. And
while the national media are charting trends of support for the
remaining major candidates, some Vermonters are still weighing which candidate will get their vote. We talk with political analyst Eric
Davis and take your calls. (Listen)

Also in the program, the controversy over preserving old cemeteries. A
situation in Hartland has raised the question of when it’s appropriate
to relocate an old cemetery, and what rules govern the decision. In this
case, a prospective home builder has the legal standing to move a
dilapidated cemetery established in 1830, but descendants of people
buried there object to the proposal. (Listen)

And we listen to the sounds of winter necessity for those who take the
ice: getting your skates sharpened. We learn about what makes the
perfect blade for hockey players and figure skaters. (Listen)

Comments from listeners about the Vermont primary:


Bruce from South Burlington:
I find them (Hillary Clinton and Barack Obama) fairly close on most issues. The decider for me is that Clinton is opposed to talking to governments that we are not friendly with. She has already dumped on Cuba for Raul Castro taking over for Fidel, i.e. they didn’t go to a democratic government. Well Mrs. Clinton, it isn’t going to happen just because the U.S. government thinks every country in the world should be just like us. Obama will talk to the governments of Cuba, Iran, etc. I am convinced we will get further with dialog.


Doug from Norwich:
I have been undecided, going back and forth between Obama and Clinton for some time. I have the highest regard for both candidates while at the same time, feeling unsure about each. For Clinton, some of the nasty campaign tactics have turned me off while I still think she has a strong background for the job. For Obama, I feel how he can affect people but it is beginning to feel like that of a pop star and [I’m] getting tired of hearing that same old song. I am beginning to wonder if he will be a one-hit wonder and we will awake from the infatuation with an inexperienced president. I have decided that I would vote for whomever shows up in Vermont first and for more than an airport stop like McCain. Without either of them giving Vermont the respect we deserve, I may end up voting for Edwards or Kucinich.


Fred from Windsor:
Am I wrong or do you also think that Ralph Nader speaks more for Republicans? He has disturbed Democrats at elections and continues to stick his nose in when it appears that Democrats are doing well? At any rate, I will vote for Mr. Obama because he has been steady and non-agreesive. He has talked issues while Hillary has mostly complained. I feel Obama is the only candidate who truly speaks of change and his approach shows that.


John from Brookfield:
Who can best beat McCain? I am undecided! How do you think Obama and/or Clinton will fair against the well-oiled Republican attack machine?


Steve from Barre:
The specific health plans of both candidates are only general guidelines which will be significantly changed and altered by the Congress; the final product will be much more reflective of the politics of Congress than the politics of either Sen. Obama or Sen Clinton. The same can be said for other specific positions of both candidates. I favor Sen. Obama primarily because (pun intended) I think he has a better chance of defeating McCain.


Scott from Shelburne:
I’m no longer undecided because I have a friend from the moderate south, and he states that he will never vote for Hillary. He’d vote for anyone but Hillary. When I asked him why, the response was "because she’s a Clinton." I believe Mrs. Clinton is not electable in the general election because of these sentiments. The primary concern in this election for me is to remove the Republican leadership, because of this I will vote for Barack, even though I believe Hillary would make a better president.


Janet from Sutton:
I have decided to vote for Barack. I know that Barack does not have as much experience, however, I think the mode that Hillary is in is "old" politics and we need a breath of fresh air. I will admit that some of the things said about Hillary are sexist, but my vote is based on the candidate, not race or sex. Either way, I’ll vote for the candidate who earns the nomination come November.


Tang from Burligton:
Although I hate the fiscal policy of the Republicans, it seems that McCain is the only one that can see that we spilt the milk in Iraq. I’d love to get our people out of there, don’t get me wrong. But they didn’t invite us in either. We left the place a shambles and we are certainly honor-bound to clean up the mess we made as best as we can, and not just try to shirk our responibilities. That being said, I really hate taxes, too, but it’s where we put the money that matters. If we can’t balance our own check-book, then ultimately we have to crash and crash hard. If not in a year, then in 5 or 10 yearsBriana from Burlington:
I’m have no idea whom to vote for and probably won’t until I go into the voting booth Tuesday. Like others have said, Obama is a brilliant speaker, but is that all? I am very hesitant about voting for someone whose record I cannot question, being as it is not there. As for Clinton, I lack faith that she will be able to pull together the Democratic Party even though I see her being a fantastic commmander in chief.

Jay from Fairlee:
I’m in Poland working on a job that takes me to various countries around the world. It is overwhelming to listen to folks over here in Europe talk about the relief they feel that there is someone running for office in the US from a different position than those taken for the last 16 years. Hillary just looks like another Republican to me. She is rehashing the politics of the past, and will start increasing her fear-mongering rhetoric (the very same that sold us the Iraq war) in Tuesday night’s debate. Just you watch and see. So I support Barack, not only for the good of the country, but for the good of our relationship with the rest of the world. We’re a democracy. Change comes from the people. Vote for change.

Alice from Sutton:
I am a 65 year-old female from Sutton who originally supported Richardson. I always felt the descrimination against women but Clinton is not the one for the White House. We need to elect a Democrat to help undo the damage done by Bush. Hillary has too much baggage. Bill is a lightning rod for criticism/negativity and if Hillary were the nominee, the general election would get incredibly nasty. We don’t need to have only two families in the White House for twenty-five years. Bill Clinton will not take a back seat as First Man.

Listener from Pennsylvania:
I am a lover of Vermont and often visit. I reside in Pennsylvania and am also facing a choice in our upcoming primary. I agree that Obama lacks content yet had been leaning toward him – putting all my chips on process. However: last night on ABC Nightline they did a piece on Obama’s past which raised some questions in my mind. At the end the reporter related that Obama refused to be interviewed regarding the story. Seems to me that is business as usual. Governance from behind the curtain.

Gregor:
Thanks for your show today about the choice between Clinton, Obama et al. I would love to hear even more Vermonters talking about this subject — is there any chance of you posing the same question on another show before we all go out to vote next week? It’s really the most important issue in all of our lives this year; even if you have to postpone a previously scheduled show by one day, I think it’d be worth it for your listeners!