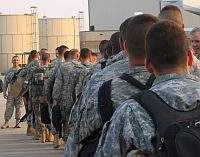 About four hundred members of the Vermont National Guard are returning to Camp Shelby, Mississippi, having
served almost a year in Iraq during their 18-month deployment. Their return means that nearly all of the Vermont
Guard members who served in the war are on their way home.

Click on the headlines below to listen to the stories

Between doing paperwork, turning in equipment and getting medical checkups, soldiers
at Camp Shelby attend counseling sessions where they’re
encouraged to discuss their first thoughts and feelings on arriving back in the
U.S.

The first group of the more than 400 Vermont guard members stationed in Iraq
has returned to the U.S. The soldiers are members of Task Force Saber which was
deployed early last year.They touched down over the weekend in Mississippi, and
VPR’s Steve Zind was there.

VPR’s Steve Zind is with Vermont Adjutant General Michael
Dubie in Mississippi, where the General is welcoming the troops. He spoke with
Steve
Delaney
on
VPR’s
Midday Report about what the soldiers are telling Dubie about their experiences.

We examine the adjustments families made during deployment, and the psychological
hurdles that soldiers will face as they readjust to civilian life.