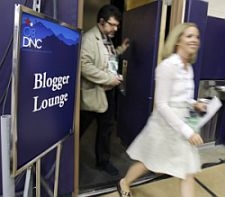 Some are busy blogging – giving their take on the party – and the media covering it.

Todd Zwillich met a few bloggers on the convention floor.

(Zwillich) Madeleine Kunin was governor of Vermont from 1985 until 1991. Today, she’s a Vermont delegate to the Democratic National Convention. That’s by day. By night back in her hotel room, Kunin has been posting missives for the Huffington Post.

It’s a left-leaning political forum that attracts millions of visitors. Standing on the convention floor this week she, like many convention delegates, lamented Hillary Clinton’s loss to Barack Obama for the Democratic nomination.

(Kunin) "And last night I wrote about Hillary Clinton’s speech, of course, and how moving it was, and how strong she was in her support for Barack Obama."

(Zwillich) Hundreds of bloggers showed up and were granted credentials at the convention. The vast majority of new media writers are not experienced politicians like Kunin.

(Kunin) "As an older delegate, you might think I’d hold back on entering that blogosphere. But that’s how you communicate. And I’m happy to join in the new journalistic world of today. Now I still like a newspaper and I still watch the evening news."

(Zwillich) But many bloggers say the very reason they work the convention is because newspapers and television miss the real stories. Phillip Barruth is delegate and he’s been blogging for The Burlington Free Press.

(Barruth) "The overarching theme has been the national media’s almost rabid desire to read the events of the conventions to fit into preexisting narratives or story lines. One is this is a historic event so they’re out looking for celebrations of the 88th anniversary of the women’s right to vote; they’re making a lot of the 45th anniversary of Martin Luther King’s I have a Dream speech. But they’re also very interested in playing up the rift between the Clinton camp and the Obama camp."

(Zwillich) Barruth says his mission has been to tell stories he thinks the traditional media are blind to.

(Barruth) "Last night I was sitting in our delegation. Richard Dreyfus dropped into the seat behind me and began to try to convince our entire delegation to launch a voice vote for censure of the president. He was going around under the radar trying to build support for a mass protest on the floor to stop the convention until that issue was dealt with. Now as far as I know nobody covered that story. But there were about 8 to 10 photographers walking around watching him do that."

(Zwillich) Not every Vermont blogger spent hours on the convention floor. John Odum posts for Green Mountain Daily. He’s been spending most of his time in what’s called the Big Tent. That’s where everyone from left-leaning bloggers from Moveon.org and Daily Kos rub elbows with the likes of Texas oil man T Boone Pickens.

Some bloggers cover politics from a conservative viewpoint too. And this isn’t the first convention that bloggers have covered. But Odum calls this year’s Democratic gathering a milestone.

(Odum) "The new media is becoming one of the stories here. As a lot of the traditional media look around and some of the narrative that have been pushed like the tension between the Hillary crowd have really kind of fizzled. They just weren’t there. People are looking for what else is going on and more and more have found their way down to the big tent.”

(Zwillich) If Odum and the other left-leaning Vermont bloggers have uncovered stories the big media missed in Denver, it still seems like only part of the story. None of the three is planning to travel to St. Paul, Minnesota, next week to cover the Republicans at their convention.