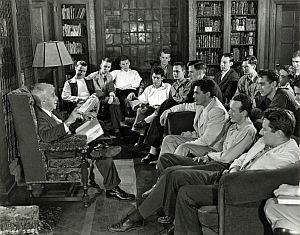 (Mitch Wertlieb) Part of Robert Frost’s popularity is that his imagery is familiar, especially to his New England neighbors. But there’s much more to both the poet and his work. VPR is exploring Frost’s life and work with Vermont Reads, an annual program sponsored by the Vermont Humanities Council. This year people around the state are reading "A Restless Spirit", The Story of Robert Frost by author Natalie Bober. I’m Mitch Wertlieb.

Frost’s poems appear simple and accessible through his use of natural imagery and every-day speech. But, they are complex in both structure and meaning.

Likewise, Frost’s life – on the surface – appeared to be that of a fairly simple man. In fact, his life – as a poet, farmer and teacher – was full of conflict and contradiction.

He was a shy man who cast himself in a very public role, and cultivated an image that seemed to lack sophistication. But to Tom Slayton, Editor Emeritus of Vermont Life Magazine, and long-time Frost reader, there are hidden depths in both the persona and the poems.

(Slayton) He liked to be thought of as the old genial country bard. He talked about giving readings as "barding around". But there’s another side to Frost, and this is the side that confirms his authenticity for me – and that is that his poems very often touch on really the dark side of the New England experience – poems like Home Burial, and Out, Out where a kid saws off his hand and sees his whole life spoiled because of that accident, and dies. Death Of The Hired Man – any of those poems explore the deeper aspects, explore the dark side of New England, and I don’t think you can understand New England unless you understand and are willing to deal with that side of it, and Frost does that deeply, eloquently and well. Now to be fair and to be honest, he does that more in the early part of his career. As he gets older and wins more public acclaim, he does emphasize the country bard, the nostalgic commentator on country life aspect of his poetry

(Wertieb) Why do you think he emphasized that quaint country bard aspect of aspect.?

(Slayton) I think because he found that it worked. As the country became more complex more urban, people wanted to reach out to their pastoral country roots, and Frost played to that. Now, he played to it with enormous intelligence and subtlety but he did go for that persona.

(Wertlieb) Frost scholar and Claremont McKenna professor of literature Robert Faggen agrees that there’s much more to Frost than the image of the genial country bard.

(Faggen) He had a public persona, but we don’t really know him. Frost did not allow the public into the tragedies that befell him in the 1930’s. The loss of an adult daughter from an infection due to pregnancy, the suicide of his adult son Carol – he shot himself with a deer rifle, but Carol suffered severely from depression – and another daughter suffered severely from mental illness all her adult life. These are aside from the loss of two children in infancy. But he’s not terribly personal in the poetry. There’s something rather distant and cold in the poetry. It’s not really that warm in terms of inviting us into a personal world.

(Wertlieb) But he did have this image of himself as the country bard, the farmer poet.

(Faggen) Well to some extent he was a farmer – he wasn’t a great farmer, but he was a chicken farmer, And he knew farming, but he also knows at some level that he’s working in a very ancient tradition of the farmer poet that goes all the way back to Virgil, who was a farmer poet, or Horace. So there is a tradition of the pastoral poet who was a farmer poet. And I can’t say that Frost liked farming – matter of fact, I think he hated it. But he did it. I think it was something that he saw as necessary labor, something that connected him to the world. It gave him an understanding of what life was about. To put it bluntly, it gave him material.

(Wertlieb) And Frost used it well. The Tuft of Flowers is a poem about haying, it’s also a solitary contemplation of the notion that human connectedness to the natural world – and to absent friends – transcends time and touches eternity.

A recording of Frost himself, speaking the poem was made at the Bread Loaf Writer’s conference in Ripton, where he taught.

I went to turn the grass once after one
Who mowed it in the dew before the sun.

The dew was gone that made his blade so keen
Before I came to view the leveled scene.

I looked for him behind an isle of trees;
I listened for his whetstone on the breeze.

But he had gone his way, the grass all mown,
And I must be, as he had been,-alone,

‘As all must be,’ I said within my heart,
‘Whether they work together or apart.’

But as I said it, swift there passed me by
On noiseless wing a ‘wildered butterfly,

And once I marked his flight go round and round,
As where some flower lay withering on the ground.

And then he flew as far as eye could see,
And then on tremulous wing came back to me.

I thought of questions that have no reply,
And would have turned to toss the grass to dry;

But he turned first, and led my eye to look
At a tall tuft of flowers beside a brook,

I left my place to know them by their name,
Finding them butterfly weed when I came.

The mower in the dew had loved them thus,
By leaving them to flourish, not for us,

Nor yet to draw one thought of ours to him.
But from sheer morning gladness at the brim.

The butterfly and I had lit upon,
Nevertheless, a message from the dawn,

That made me hear the wakening birds around,
And hear his long scythe whispering to the ground,

And feel a spirit kindred to my own;
So that henceforth I worked no more alone;

But glad with him, I worked as with his aid,
And weary, sought at noon with him the shade;

And dreaming, as it were, held brotherly speech
With one whose thought I had not hoped to reach.

(Wertlieb) In her book, "A Restless Spirit, the Story of Robert Frost" author Natalie Bober writes that the ability to see infinity in finite things may also have helped Frost reconcile himself to some of his most painful personal losses.

(Bober) Just as Rob began his second year at Harvard, he experienced another great grief.

His son Carol shot himself. Lillian had undergone serious surgery, and Carol feared she was going to die. He forgot that her spirit and strength had brought her through other illnesses. He became despondent.

It was a year before Rob began to emerge from the darkness of this last despair. He had lost his daughter, his wife and his son in the space of only six years. But he was winning his battle to keep his sorrow beneath the surface. He could make his poetry the medium through which he could view his grief. And he could write, One Step Backward Taken.

Not only sands and gravels

Were once more on their travels,

Great boulders off their balance

And started down the gully.

Whole capes caked off in slices.

I felt my standpoint shaken

In the universal crisis.

But with one step backward taken

I saved myself from going.

A world torn loose went by me.

Then the rain stopped and the blowing

And the sun came out to dry me.

(Wertlieb) For a time Robert Frost was considered to be a less complex poet than some of his contemporaries. But many now think he was one of the most original voices of the 20th century. Tomorrow, we’ll explore his legacy. You can find more about Vermont Reads, this series and offer your own thoughts about Frost and his work on-line at VPR-dot-net.

"A Restless Spirit, the Story of Robert Frost" was published by Henry Holt – also the publisher of Frost’s poetry.