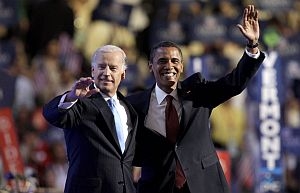 (Host) Vermont’s delegates have had some prized real estate at the Democratic National Convention this week.

The two dozen or so Vermonters are sitting in the front of the Pepsi Center in Denver.

Congressman Peter Welch says that gives the delegation an up-close, unobstructed view of the action. And he credits the chairman of the Democratic National Committee for the good seats.

(Welch) “Well, we got hometown advantage on the floor. Boy, I’ll tell you, Governor Dean, the DNC chair, put us – you know the only way we could be closer would be on the platform itself. We literally, you can see the speakers, you don’t have to look at the jumbo screen. We’re as close as you can be without being on the podium.”

(Host) Welch is one of the delegates to the convention.

He spoke from an elementary school in Denver where the Vermont delegation was working on a public service project.

(Welch) “We’re doing landscaping on a playground reconstruction. It’s really in memory of a child who died in a gunshot wound, a fifth-grader. It’s an unspeakable loss for that family and for the community. And the family’s request was to have a playground constructed in memory of their child.”

(Host) The Vermont delegates worked with colleagues from New York and California on the project.