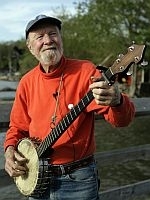 These were some of the voices in this week’s news:

(Bea Grause, Vermont Association of Hospitals) “The bottom line is that in order to create a sustainable health care system we have to produce enough revenue to pay for the care that we all get. And if that’s not possible, we have to decide what we’re willing to do without. And that’s where the cost shift comes in, because currently, nationwide, one out of every four dollars that is spent on health insurance goes to the cost shift.”

(Steve Wark, Department of Public Service) "The information today regarding Vermont Yankee’s leak in this cooling tower comes as a great disappointment and it’s unacceptable. While we recognize that this failure is not a nuclear component and that public safety was not at risk, the downrate, nonetheless, has a very real impact on customers.”

Vermont will get $2.5 million for fuel assistance

(Sen. Patrick Leahy) “They had money just sitting in the vault, some left over from last year. And my amendment in the Appropriations committee said, `You’ve got to start spending it. We can’t wait until people are literally freezing to death.’"

(Labor commissioner Patricia Moulton Powden) "I think what’s happening to Vermont is we’re maybe catching up to where the rest of the nation has been in the last year or so. And we’re seeing some actual decline in new jobs, which is new to Vermont. I’m not an economist… but they all speak to seeing continued economic slowdown for much of 2009 and I think we’ll probably see that too."

(State Treasurer Jeb Spaulding) It’s certainly a surprise when you see what were gold-plated names going the way of dinosaurs but the fact that we’re in turmoil and still trying to deal with the housing bubble and combine that with things like energy costs is not a surprise to us. What we try to do is make sure we have a great deal of diversification in our investments, keep a close eye on our investment managers, and don’t panic."

(Folksinger Pete Seeger) I fell in love with the old songs that people knew. They heard their grandmother sing some old song. And then I realized that it was this sense of participation that was important. So much of the modern life, you just sit back and receive. And TV is the extreme example of it. You receive a lot of crap and you’re being poisoned by thinking that life is just what you see on that screen. You might think of that as a radical thing but I honestly believe this world is going to be saved by people being active themselves and working with each other."