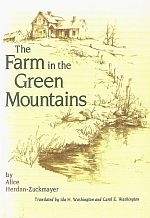 (HOST) This week VPR is honoring the accomplishments of notable Vermont women. Today, commentator Cyndy Bittinger tells how one of the best books about farm life in Vermont in the 1940s came to be written by a German refugee.

(BITTINGER) Alice Herdan-Zuckmayer was a German actress and her husband Carl was a German playwright. In 1939, they were two of the most glamorous refugees that the famous radio commentator Dorothy Thompson sponsored to come to America.

Carl Zuckmayer tried to continue writing in America, but he was unsuccessful and the family was soon nearly destitute. A Barnard, Vermont, resident rented them Backwoods Farm, and made necessary improvements so they could try to make a go of farming for themselves. Alice and Carl became Vermont farmers in order to survive.

Later, Carl wrote, "In Vermont my wife saw the Vienna Woods and I saw the Taunus Mountains; both of us were reminded of the Salzburg area, which lies in the foothills of the Alps. Only everything was enlarged to super-dimensions… under a great vault of sky. Our friendly relations with Dorothy (Thompson) gave us a sense of neighborliness and of midsummer rest before the restless to and fro movements began: almost two years of learning how to walk in America and struggling to find a basis for a livelihood."

Alice, knew something of farming in Austria, but she had – quote – "no idea how the animals whose products I ate lived, how they were milked, when they laid eggs, or what they ate."

But she soon found out. Wearing Dorothy Thompson’s cast off clothing, Alice became a plumber, and took charge of the house, the kitchen and the garden. She bought farm animals, ran the poultry business, and ordered equipment on installment from mail-order companies. She basically read the manuals issued by the Vermont Farm Bureau and the U.S. Department of Agriculture to learn what to do, while Carl built a goat farm.

Alice and Carl both wrote accounts of their experience for the German public. The stories were so moving that Alice’s book, "The Farm in the Green Mountains," became a German best seller in 1949.

In it, Alice wrote, "In America we learned anew to walk, listen, touch, smell, and taste. Of course we could not speak the language correctly and had a foreign accent, but people understood us, and we knew what they were saying… The ties to the new land are as strong as if we had always lived there."

Perhaps her book on farming in Vermont became a best seller because it provided Germans with an escape from grim post-war reality. The couple eventually returned to Europe and resumed their literary careers, but of their arrival, Alice wrote, "We looked for our friends. Many were dead, blown to pieces by bombs, burned up in fires, or hanged by Hitler’s courts."

It seems a bit ironic that one of the very best accounts of farm life in Vermont during the 1940s was written by a German woman for German readers – but that was her return gift. From the date it was published, her book has brought European visitors here.

And for her detailed documentation of the era, we who love Vermont history are very much in her debt.