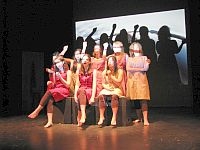 (Host) Most students, at some point in their academic lives, study the poetry of Robert Frost.

(Bruno) "I’ve wanted to get away from poetry being so rarified and precious. Poet laureates like Billy Collins and Robert Pinsky have advocated for the sheer pleasure of poetry and just reading it and I’ve been trying to get that in school. And I thought this would be a great extension of that idea."

(Keck) Seventeen-year-old Jenna Baird, a junior at Rutland High School plays the cello on stage. She creates a simple yet moody backdrop, while nine seventh- and eighth-graders from Mill River perform a sort of choreographed poetry slam.

(Keck) The Road Not Taken – one of Frost’s best known poems is performed by all the students. But some of his other works, like: Birches, The Bonfire, and After Apple Picking are performed by one or two performers or small groups. Lush images of fields and pastures, ripening fruit and other natural Vermont scenes, are projected onto the back of the stage.

Eighth-grader Lilly Pritchard of Clarendon remembers learning one or two of Frost’s poems in grade school. But she says taking part in this performance has given her a new appreciation of his work.

(Pritchard) "I wasn’t too familiar with the poems – but as I got to read them and stuff – there’s a lot of depth in them, which is really cool." 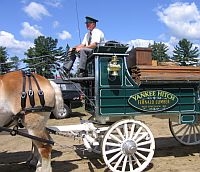 (Bruno) "Kids will surprise you in some beautiful ways. And to take a piece like this – fairly sophisticated stuff – Frost’s words – and after a rehearsal or after a piece just to see it anew and perhaps to take what I have envisioned and for them to make it something new – their own is all I could have hoped for."

(Keck) Peter Bruno and his students will perform Frost Rimes this weekend at Mill River Union High School in Clarendon.