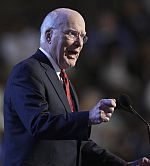 One of the speakers at this week’s Democratic National Convention was Senator Patrick Leahy. Leahy is a superdelegate at the convention and he was an early supporter of Senator Barack Obama.

Click on the Listen icon to hear Leahy’s speech.

Click here to go to the VPR Campaign Reports 2008 page.