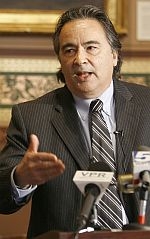 (Host) There’s been an unexpected development in the gubernatorial race.

Progressive Party candidate Anthony Pollina says he’s decided to run as an Independent candidate this fall, in an effort to broaden his political base.

State law prohibits Pollina from running as both a Progressive and an Independent.

(Kinzel) Pollina says he decided to shed his Progressive label, in part, because he’s met a number of independent voters who feel that party affiliation is a liability.

Pollina says he’s still a Progressive at heart and that the change is simply a way to attract as many people as possible to his campaign:

(Pollina) "I’ve decided to appear on the ballot as an Independent because I truly believe that it opens the door to allowing more people to become involved and frankly more people to participate in the campaign and more people to vote for me. I think Vermonters want change and if party labels get in the way of that change I think it’s important to move beyond those labels."

Pollina also believes there are a number of voters who are "tired of the partisan bickering" that’s occurred in Vermont in recent years:

(Pollina) "They want someone who’s going to not worry about whether the Democrats are winning or the Republicans are winning- what they want is a governor who realizes that when we do the right thing for Vermont we all win."

Will Pollina’s decision to run as an Independent help him attract new voters?

Middlebury College political science professor Eric Davis thinks the change will help a little. But Davis says it doesn’t alter the basic dynamics of a three person race where the anti Douglas vote is split between Pollina and Democratic candidate Gaye Symington:

Davis has been studying voter turnout records to measure the impact that a strong showing by Democratic presidential candidate Barrack Obama could have on Vermont’s statewide races.

If Obama’s candidacy boosts voter turnout by roughly 10% – Davis thinks that Douglas will narrowly escape the Obama wave as long as he retains most of the people who voted for him in the previous presidential election:

(Davis) "So even with a substantial increase in Democratic turnout which I believe is likely this fall the governor may have enough residual support from his nearly 3 decades in Vermont politics to squeeze out a narrow victory this November in a three person race."

If no gubernatorial candidate receives at least 50% of the vote, lawmakers will decide the election in January.