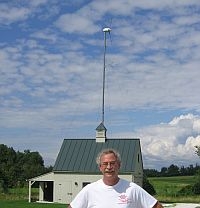 (Host) For years, home wind turbines have been popular mainly with the off-the-grid crowd.

But now there’s a new market: People who are tired of paying high electric bills.

Wind proponents say new technology and government help could bring turbines to thousands of back yards in the Northeast.

But there are some questions about whether household-sized wind will really work.

As part of a collaboration with Northeast stations VPR’s Steve Zind reports.

(Zind) There’s a slight breeze as David Blittersdorf tries to coax a test turbine to life 80 feet above a Vermont field.

With $3 million invested and more to come, he says Earth Turbines is a departure from small, undercapitalized companies that have been the industry norm.

(Blittersdorf) "In the past 30 years small wind has been sort of sold out of the back of a pickup truck."

(Zind) Blittersdorf plans to mass produce a one-size-fits-all back yard turbine that’s as easy to buy as a car.

(Blittersdorf) "We would like to come to the homeowner and say, ‘look you want a wind turbine? Fine. Sign here.’ The next day at sunset, the wind turbine’s spinning in the breeze."

(Zind) Blittersdorf has requests for more than 300 turbines in Vermont alone. That’s a sizeable number when you consider it’s nearly as many as there are now in the entire Northeast.

Blittersdorf says it might take two decades for one of his 25 thousand dollar turbines to pay for itself. But higher energy prices and greater demand could cut the payback time considerably.

Today’s turbines are made to connect to the power grid. What the owner doesn’t use is essentially sold to the local utility. Jacci Rousseau can actually see the power flowing from her three year old wind turbine onto the grid.

(Rousseau) "I like to watch it. I stand out here and watch the wind power, the turbine going and sometimes my electric meter going backwards and that’s very nice."

(Zind) Rousseau says judging by the number of curious people who’ve knocked on the door of her central Vermont home, there’s a growing interest in small wind.

Some Northeastern wind installers agree. But Bill Stillinger of Pioneer Valley Photovoltaics isn’t sure wind has a bright future in the region.

His company sells wind turbines and solar panels in Massachusetts and Connecticut.

Stillinger says there’s still a lot of uncertainty about how much electricity can be generated by small wind turbines in this part of the country.

(Stillinger) "We are collectively learning as we go to find that some of the siting conditions and some of the general expectations in the Northeast part of the United States are something we’re still learning about."

(Zind) In fact Massachusetts recently suspended a state program that funds small wind projects because they were built in places where there wasn’t enough wind and manufacturers overstated the output of their turbines.

In New York and Vermont rebates are boosting sales of small wind turbines.

Connecticut and Maine don’t have rebate programs, but they’re working on them.

Generally, though, there’s much more money for solar energy – from both the state and federal governments.

(Zind) Stimmel says without strong financial incentives from government, there no demand for small wind and without demand, the industry can’t grow.

He says local restrictions are another issue. For example many communities limit the height of structures to 35 feet.

(Stimmel) "And the reason is that 100 years ago, the pressure in firefighters hoses could not reach higher than 35 feet."

Noise and aesthetics can also be issues: A neighbor challenged David Blittersdorf when he installed a wind turbine at his house.

(Zind) Back at Blittersdorf’s test turbine, the breeze has picked up.

Blittersdorf says putting turbines in the right location is critical and he says more people will turn to wind as they calculate that the rising cost of electricity makes generating their own power an increasingly attractive option.

(Host) Tomorrow, we look at commercial wind projects in the Northeast.

This series on wind power is part of NPR’s Local News Initiative and the Northeast Environment Collaboration. It’s made possible in part by a grant from United Technologies.