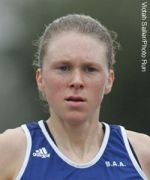 (Host) Monday’s Boston marathon is one of the most prestigious road races in the country, but on Sunday Boston hosted another elite group of runners: the women’s U.S. Olympic team trials. One Vermonter was among them: Kasie Enman of Huntington.

Enman ran yesterday’s marathon trials in 2 hours 37 minutes. She wasn’t one of the top three finishers who won places on the US Olympic team, but she did finish eleventh, far exceeding her own expectations and her personal best time.

(Enman) "It’s so hard to tell, I keep surpassing what I thought I could do (laughs). Each time you run a time you then instantly think, ‘Well, if I did that, and my training could have gone better, I know…’ You know if it’s another good course and good day it seems like I must be able to keep getting better. You are always looking ahead at that next step."

(Host) Enman says she plans to focus next on shorter distances, but she wants to return to the Olympic marathon trials in four years.