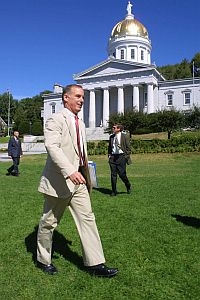 (Host) When former Governor Howard Dean became chairman of the Democratic National Committee in 2005, he put a controversial plan in place that allocated financial resources to every state Democratic committee in the country.

As VPR’s Bob Kinzel reports, the 2008 elections will be an important test for the 50-state strategy.

(Kinzel) During his 2004 presidential campaign, Dean saw the importance of developing strong grassroots organizations throughout the country. When he became chairman of the DNC, Dean decided to follow the same approach.

It’s a policy known as the 50-state strategy. The basic premise is that Democrats need to invest money in every state to build a solid foundation for future local, state and federal races.

Some critics said the policy was a waste of limited financial resources. But when the Democrats regained control of the U.S. House in 2006, the 50-state strategy was seen as being a key part of that success.

Recently, Democratic presidential candidate Barack Obama asked Dean to stay on as head of the DNC. Obama’s decision was viewed as a strong endorsement of Dean’s policy:

(Dean) "Senator Obama has said he wants to run a 50-state campaign and we’re ready for that. At the DNC we’ve built a strong ground game all over the country. We’re seeing the benefits of that; we have better technology in place than ever before."

(Clyburn) "And that’s why we’re winning these special elections. I can tell you we would not have won in Louisiana or in Mississippi had it not been for that 50 state strategy."

(Kinzel) Vermont Democratic chairman Ian Carleton says the DNC funds have made it possible for him to hire four additional staff people and he thinks the 50-state strategy is a perfect fit with the Obama presidential campaign:

(Carleton) "There’s a lot of truth to the fact that Democrats may well win states and do very well in Congressional districts where we have not done well in a very, very long time."

(Kinzel) Ray Buckley is the chairman of the New Hampshire Democratic Party. He says Dean’s policies have revitalized his organization:

(Buckley) "Governor Dean’s commitment to the 50 state strategy really has set him apart from any previous national chair in my memory certainly the amount of support that he offered us and provided for us in 2006 made a difference in flipping this state into a great Democratic state joining the rest of New England ."

(Kinzel) And Buckley doesn’t have much patience with critics of the 50-state approach:

(Buckley) "I understand that there’s a lot of people in Washington that no longer have their consulting contracts worth hundreds of thousands if not millions of dollars because Governor Dean rightly put those dollars into the states and working and organizing the community."

(Grover) "Overall, I think it’s provided that party with a lot of hope in some places where it seemed pretty hopeless…even in Montana. Montana now is trending Democratic and has a real chance to be a state that can be put in that column. So I think it’s given a lot of life to the party."

(Kinzel) The 2008 election results will offer a final judgment of Dean’s 50-state strategy. If Democrats win back the White House and expand their majorities in the U.S. House and Senate, the policy will be seen as a great success.

But if the Democrats don’t achieve these goals, some party leaders will want to re-examine the policy.

And it’s likely that the architect of the plan won’t be there to defend it because Dean is expected to step down as DNC chairman next winter.